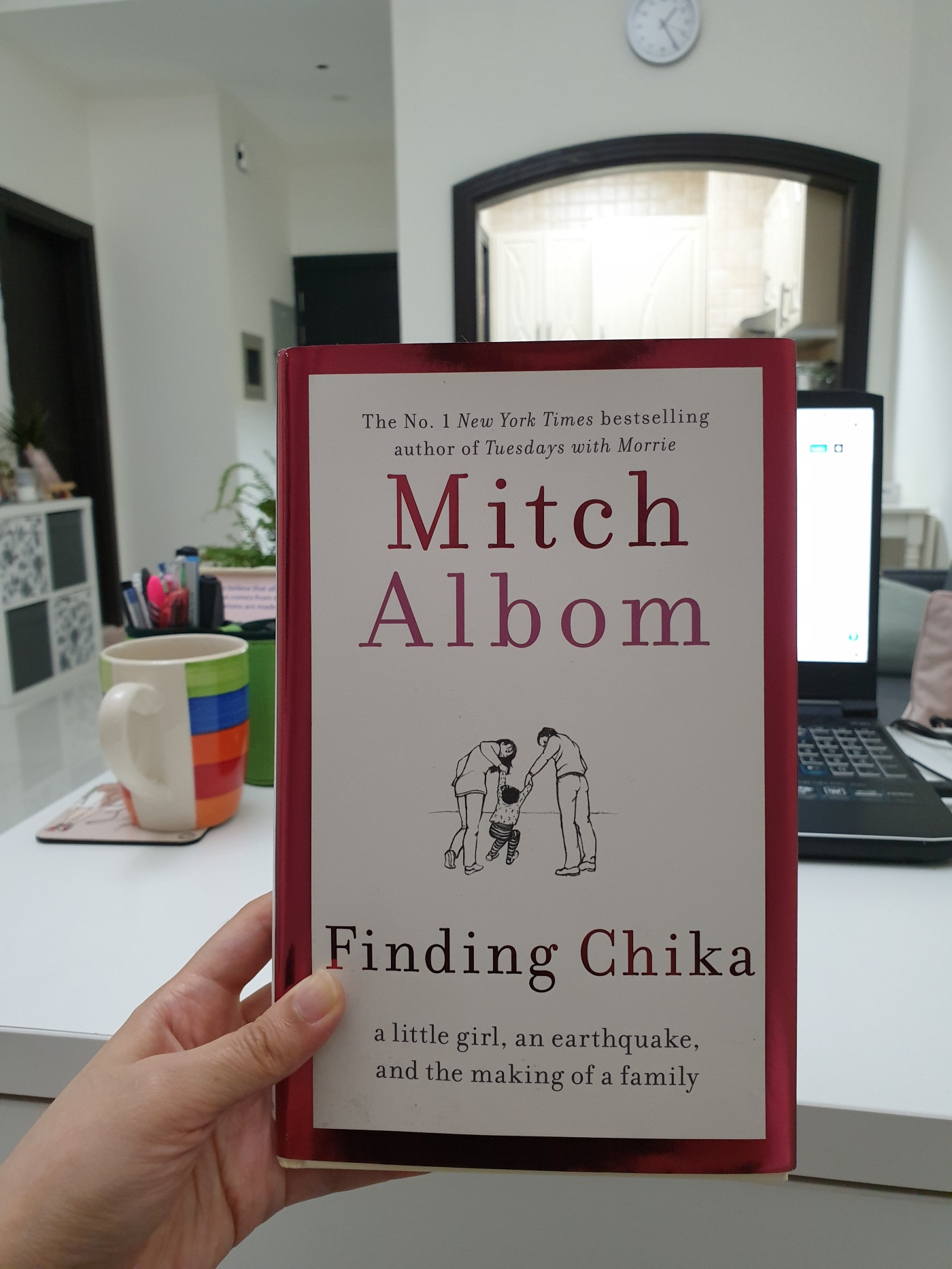 I like to read stories with a hint of sadness but as much as I enjoyed reading Finding Chika by Mitch Albom, I found it difficult to write this book review as it is such a heart-wrenching tale with a tragic ending.

Finding Chika is a moving memoir of a girl named Medjerda ‘Chika’ Jeune, her adoptive guardians (Mitch and Janine Albom), and their battle against a terminal disease. Chika was a little girl who spent her infancy in extreme poverty and after her mother’s death, she was brought to Have Faith Orphanage which was run by Mitch Albom and his wife, Janine in Haiti. At the age of five, Chika was suddenly diagnosed with a terminal disease that no doctor in Haiti could treat. In an attempt to have her cured, Mitch Albom and Janine Albom both took Chika to America to have her treated.

The novel starts with Chika attempting to have a conversation with Mitch Albom by asking him “Why aren’t you writing Mister Mitch?”. A few paragraphs down, the reader receives a shock once they learn that Chika was already dead and the author was only reliving memories of her. Throughout the book, you will find chapters titled ‘Us’, ‘You’ and ‘Me’. For the chapters titled, ‘Us’ Mitch imagines that Chika is in the room with him while he writes the book and he shares conversations with her. In ‘You’, these chapters consist of Mitch’s memories with Chika and for chapters titled ‘Me’, it consists of his personal thoughts.

The author takes a unique approach in telling the story by splitting it into three perspectives. In ‘You’ Mitch shares conversations with Chika which are very poignant. I can never forget this particular scene that they shared when he was imagining her while he was writing. In this scene, Chika asks Mitch Albom why he still keeps the school questionnaire that she filled back in Haiti. At the bottom of the questionnaire, she had to finish the following sentence:

And she wrote a single word: BIG.

It was a simple request that was not granted. However, though this scene was saddening, it also highlighted Chika’s charming and sunny disposition as she happily reminds Mitch of the time where she did become big because of the weight she gained due to the treatments she underwent.

Every chapter in the book is worth reading. In the later chapters, Mitch and Janine both find Chika singing “No Longer a Slave” by Bethel Music where the lyrics proclaim “I am a child of God”. Chika was already in the advanced stages of her treatment and her health had deteriorated. She had lost so much weight and she was already confined to a wheelchair. Yet, her belief in God did not waver and she chose to worship Him instead of being angry at Him for not curing her disease. Such a strong display of faith was both touching and inspiring. It made me reflect and ask myself this question: How can I improve my faith so that it will be as strong as Chika’s?

Additionally, throughout the novel, you will also encounter pictures of Chika. You will see pictures of her as a baby, snapshots of her life with the Alboms, and there are also images of Chika in different stages of her treatment. Seeing all those pictures of Chika, made the emotional impact of the novel even more profound and the imagery much more vivid. It made reading about the trials that she went through even more painful.

However, even though the story focuses on Chika, it also gives us a glimpse of who the author is. Mitch spoke candidly about some of the regrets that he had in life. During his youth, he prioritized his career which led him and his wife to postpone having children until it was too late. When Chika entered their life, she gave them a chance to experience how it was like to be a parent, and the love that they have shared was perfectly encapsulated by this line that Mitch wrote “You never have to worry about us forgetting you… we’d lose every memory we ever had before we would let go of yours.”

They say that you never truly get over the loss of losing someone dear to you, you just learn to live with the pain. Finding Chika reflects the raw pain that comes with seeing someone you love slowly pass away. Every page of the book narrates the challenges Mitch and Janine experienced and the heartbreak that they suffered as they witness Chika slowly succumb to her illness despite their best efforts. Learning about their efforts to save Chika, the novel teaches readers the value what it means to be a family and that this is not a bond that necessarily has to be forged by blood. It can also be made by the heart. Overall, Finding Chika is a painfully sad yet beautiful novel that is worth reading. I highly recommend it.

“There are many kinds of selfishness in this world, but the most selfish is hoarding time, because none of us know how much we have, and it is an affront to God to assume there will be more.” – Mitch Albom in Finding Chika

“The most precious thing you can give someone is your time, Chika, because you can never get it back. When you don’t think about getting it back, you’ve given it in love.” – Mitch Albom in Finding Chika

“What we carry defines who we are and the effort we make is our legacy.” – Mitch Albom in Finding Chika

“Hopelessness can be contagious, but hope can be too. And there is no medicine to match it.” – Mitch Albom in Finding Chika

“You never have to worry about us forgetting you… we’d lose every memory we ever had before we would let go of yours.” – Mitch Albom in Finding Chika

“We adults can be a wretched lot Chika, yet in every child’s face we see the Lord has not given up on us.” – Mitch Albom in Finding Chika