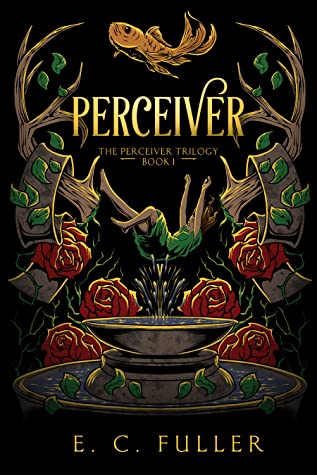 If you are twelve years old, what would you do when you discover that a magical being has stolen the soul of your parents and your entire neighborhood? This is what happens to Hattie.

Moving to a new town was not on Hattie’s to-do list for the summer.

Her arrival in Applewood brings nothing but strange things to her doorstep. A weirdly-bendable boy guards an abandoned orchard. A humorous cactus gives her a bullet. A mysterious monster made of oil stalks those around her.

And nobody can see them but her.

When traveling consultants show up on her doorstep, a chance encounter with the boy named Jack forces them to confront the monsters and their intertwined fates. Worse yet, the lives of the people she loves now hang by a thread.

When her world collides with another, Hattie must make a choice: save herself or save her parents.

Magical and fantastical, reading Perceiver is like stepping into Spirited Away or an enchanting Ghibli movie.

In Perceiver, there are two worlds, the human world, and Tsava. Tsava is a magical world and I really like how richly the author describes this new world. It is very descriptive, and the author doesn’t spare any detail making it easier for the reader to imagine Tsava.

Another interesting factor of the book is that it has an amazing cast of creatures known as Orex. The Orex are so unique and otherworldly, they will tease your imagination as you try to visualize them in your head while you are reading and learning about the different types of Orex in Tsava. The assortment of Orex is mind-blowing! You will encounter a diversity of creatures ranging from a gigantic chicken that is also a living building that houses an entire casino, all the way to computers that have a mind of their own.

Not only are the inhabitants in Tsava intriguing, but the magical system introduced in the book is also an added spice that piques the curiosity of the reader because it seems to have many sources. Though the inhabitants in Tsava use ‘tags’ which behave in a way that is similar to magic, some of the Orex living in Tsava have their own unique zen (Magic), and there are also mystical artifacts that are imbued with powerful magical properties which makes you wonder how those items were made.

With a rich world, an assortment of Orex, and a unique magical system, I feel that the world-building of Tsava is solid. Perceiver successfully manages to pull the reader into a completely different world that leaves the reader hungry to learn more about Tsava’s history, culture, inhabitants, and magical system.

Another aspect that I like is how the author switches across styles to suit the situation in the book. When the malevolent Stroilmen were introduced. I was gripped with fear and anticipation when Hattie first encountered these monsters as the author combines narrative writing with rich descriptions. This was present throughout the book and I felt that this was so effective because it added the extra element of fear, excitement or suspense that those specific scenes required.

Furthermore, I enjoyed the subtle yet realistic character development that Hattie goes through during her stay in Tsava.

I loved the world-building, the author’s writing style, and the character development of the main character. However, there were certain things about the book that I wasn’t very fond of which I feel can be improved.

Firstly, I wished that the author delved more into the backstory of the other characters. I felt that most of the character development was focused on Hattie to the extent that I knew so little of the other characters by the time I finished reading the book. This is such a shame. I would have loved to learn more about Jack, Jane, and Limn. However, because Perceiver is the first part of a series, there probably wasn’t much focus on the character development of those other three characters because there are still two books left in the series. Who knows, maybe in book 2 or three of the Perceiver Trilogy, those characters will be given the chance to grow.

Secondly, I struggled to imagine Tsava and its inhabitants. As much as I liked the world-building in the book, I found it difficult to visualize some scenes because the characters were interacting with unfamiliar creatures that can’t be found in reality. Though there were detailed descriptions, I found it difficult to imagine how those beasts looked like because they were not familiar to me. I think it would have been helpful if, by the end of the book, there are drawings to show how the creatures look like to help readers visualize.

Thirdly, I wouldn’t consider this as a critique as this is more based on my personal preference but the story ends with a cliffhanger and I felt a bit frustrated as I am not a fan of cliffhangers. However, because the author has done a good job in establishing the foundations of the story in Perceiver, I am curious about Hattie’s fate and I am looking forward to reading the next book.

Overall, this book is a good novel to read even though there were parts that I did not like and it’s also a plus that it has a beautiful cover. Perceiver is marketed for YA but because the protagonist is only twelve years old, I believe that it can also appeal to a younger audience because they can better relate with Hattie. Older readers should also keep in mind that because the character is still a child, certain elements that are generally found in YA fiction are not present. In conclusion, if you enjoyed Spirited Away or similar novels that tell of a story where the main character is whisked to an unfamilliar world, then I believe that Perceiver is a great book for you to read.

Disclaimer: I received a free copy of this book from the author via Book Sirens and I confirm that this is an honest review that I am writing voluntarily.

Days’s ReaderRank
Days has reviewed 277 books with an average rating of 3.816 out of 5.
See more…

Top 50% based on reading volume